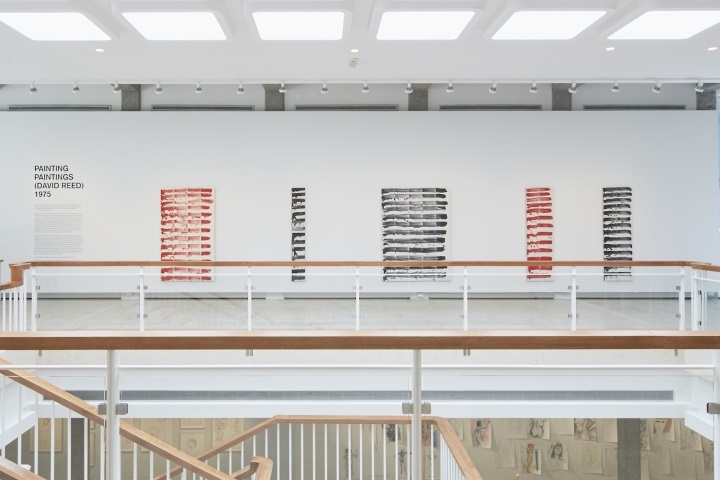 The Rose Art Museum at Brandeis University presents Painting Paintings (David Reed) 1975, an exhibition reuniting a small, starkly beautiful group of David Reed’s early brushstroke paintings, not seen together since they were first exhibited in New York City in 1975, Painted wet into wet, the canvases describe the painter and his tools, the reach of his arm, and the physical nature of his materials. The freshness of their black (and occasionally red) on white surfaces speaks to an exploration of direct process characteristic of work from the 1970s. And yet the final works contradict this immediacy, becoming gorgeous, illusionistic images, as inevitably the artist’s experience slips into the past, where gravity, bodies, and time all stop.

Curated by Katy Siegel and artist Christopher Wool, the exhibition will be on view September 11 - December 11, 2016

When Reed came to New York in the late 1960s, he found an energetic art scene, full of experimental sculpture, performance, film, and music that described its own creation. Materials— steel, dirt, rocks, film, sound—were to be just themselves, brought to life, to motion, by the artist’s gesture. Like a few other painters, Reed sought to do something similar with paint, reducing colors and composition in favor of blunt, individual brushstrokes. Despite this apparent matter of factness, Reed felt split. He was both immersed in the intense act of painting, and always a little on the outside, seeing the paintings as already receding into the recent past. Making them, he realized the impossibility of being entirely present, of acting freely without self-consciousness of the final image.

Reed originally showed these paintings in 1975 at Susan Caldwell Gallery, where they forcefully struck the younger painter Christopher Wool on a number of different levels. For Wool, Reed’s work connected the DIY film and music of the mid-1970s back to New York School artists like Jackson Pollock and Philip Guston, and, moving forward, to his own painting as a mature artist. Looking back today, the paintings seem like doors, openings between past and present.